Saved Searches Advanced Search
The Perth East Public Library has temporarily restricted access to the physical building to limit the spread of COVID-19 in our community and beyond.  See website for more details https://www.pertheast.library.on.ca/
Summary
j
jazmjoh 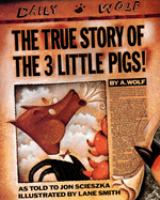 This story is about a wolf that was originally known as the Big Bad Wolf, retelling his version of what really happen with the encounter of the three pigs. The wolf's intension was to go borrow sugar to make his Grandma a cake for her birthday. The wolf had been coughing and sneezing prior to traveling so when he arrived he accidentally blew the pigs house down. He tried to eat the pigs because he didn't believe in wasting food. The police arrived and let's say the wolf was at the wrong place at the wrong time.