Saved Searches Advanced Search
The Perth East Public Library has temporarily restricted access to the physical building to limit the spread of COVID-19 in our community and beyond.  See website for more details https://www.pertheast.library.on.ca/
Print 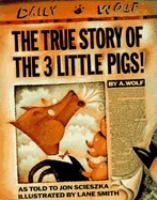 The True Story of the 3 Little Pigs

A spoof on the three little pigs story, this time told from the wolf's point of view. Lane Smith also illustrated Hallowe'en ABC which was one of The New York Times Best Illustrated Books of the Year.
Publisher: New York : Viking Kestrel, 1989
ISBN: 9780670827596
0670827592

TERRIBLE! Well there are some cute lines in there. This book is grossly offensive! And not for little children! I had to skip several lines of the book because of the language this author chose. And I do not get offended easily. I do not recommend this book to anyone!

A great retelling of the Three Little Pigs tale. This story holds up with age, as there are lots of things I missed as a child that I caught as an adult. A great read!

I love how they have the Wolf's P.O.V (point of View)

This is the story of the 3 Little Pigs as told by "Alexander T. Wolf." The pigs have the story all wrong as he was only trying to borrow a cup of sugar to make a cake for his granny's birthday. With fun pictures and an even funnier story, adults will laugh just as hard as the kids do.

"It seemed like a shame to leave a perfectly good ham dinner lying there in the straw. So I ate it up. Think of it as a cheeseburger just lying there."

Most of the cleverness was lost on my 4-year old, but I plan to try again next year. I certainly enjoyed it.

"The wolf's name is the big bad wolf and he kills all the pigs." Review submitted by Mickila for the Minecraft Book Review Raffle.

I remember reading this story in grade school. I liked it alot.

This retell of the Three Little Pigs is a great story that allows students to see that there can be different ways of seeing things. Great story to read aloud and the illustrations are great. Good book students will enjoy.

I recommend this book for reading because it tells the wolf's side of the story. In the real world there are always 2 sides of a story and as the reader it is up to use to determine which side we believe. In this story wolf switches roles from being the bad guy to being the defenseless character that just wanted to borrow some sugar and just so happen to be at the wrong place at the wrong time. This 2sided story allows children to think and to form their own opinions on the situation. The illustrations in the book are magnificent and very detailed. The overall theme is magnified through the pictures. There are so many real world connections that can be made when reading this price of literature especially because we are already familiar with the original story of The Three Little Pigs.

amynorton_0 thinks this title is suitable for 8 years and over

jazmjoh thinks this title is suitable for 4 years and over

Miagic thinks this title is suitable for All Ages

Green_Dog_1158 thinks this title is suitable for All Ages

In the book "The True story of the three little Pigs" is there is a wolf who is making a cake for his Grandma's birthday and he ran out of sugar and the wolf had a terrible cold so he asked his next door for a cup of sugar and next door was a pig and he had a house made of straws and when the wolf went to knock on the door the door fell and then he was feeling like he was going to sneeze and he sneezed and the house fell over and there was a dead pig and the wolf did not want to leave lunch there so he eat it and went to the next close door and that was the brother of the first pig and he rang the doorbell and the pig said" I do not want to fall in one of your traps" and said go away and then the wolf sneezed and the second little pig's house fell and the wolf ate the second little pig then he went to the third little pig's house and asked for the a cup of sugar but the third little pig said that some things mean about the wolf's grandma and the wolf left and the people who make it make the story add some things to the story like the wolf huffed and puffed and blew the house down. Now you know the story of The true story of the Three Little Pigs.

This is a retelling of the traditional story, The Three Little Pigs. The main difference is that the Big Bad Wolf is telling the story from his point of view in which he did nothing wrong and has been framed. Very funny and entertaining story.

This story is about a wolf that was originally known as the Big Bad Wolf, retelling his version of what really happen with the encounter of the three pigs. The wolf's intension was to go borrow sugar to make his Grandma a cake for her birthday. The wolf had been coughing and sneezing prior to traveling so when he arrived he accidentally blew the pigs house down. He tried to eat the pigs because he didn't believe in wasting food. The police arrived and let's say the wolf was at the wrong place at the wrong time.

The True story of the Little Pigs is retold with the same story line of the original story, but with the twist. The story is now being told by the wolf's side. This told to show readers that there are always two sides to a story. Very creative way to show that the Big Bad Wolf is trying to prove his innocence.

"Everybody knows the story of the three little pigs. Or at least they think they do."

“It seemed like a shame to leave a perfectly good ham dinner lying there in the straw. So I ate it up. Think of it as a big cheeseburger laying there"

There are no notices for this title yet.